Since the days of the industrial revolution, cities have been the engines of economic growth. With the greater use of technology, a number of cities are accumulating data, delivering innovation and enhancing the lives of citizens. However, public Wi-Fi is still not widespread in many cities around the world. In the course of numerous smart city projects, many cities and municipalities have set out to remedy the situation.

Located in Germany, the city of Kiel set its sights on offering public Wi-Fi and an innovative digital city experience to its citizens and visitors. Turning to local operator, ADDIX Internet Services for help with this project, they decided to use Kiel Week as the kick-off to the Smart City Kiel. It’s one of the biggest sailing events in the world welcoming more than 3 million visitors a year and features numerous concerts and events where people want to be connected to share their experience with others via social platforms.

ADDIX Internet Services took up the cause of extinguishing uncovered Wi-Fi spots on the map of Schleswig-Holstein. Since its inception in 1992, the Kiel-based company provides cities, private customers and campsites with Internet access. With high bandwidth, ADDIX distributes Internet per licensed radio to places where fast Internet was previously rare. 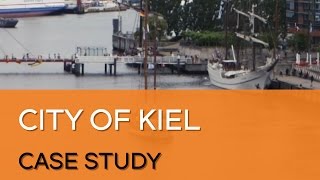